For those who doesn’t know print-manager is a project I started back in 2010 (yes it’s 3 years old now!), but only got included into KDE 4.10 (the current stable release). The reason for that is that since it was meant to replace system-config-printer-kde it needed to provide at least the most used features, and that was only possible as the logic to find a good PPD for a given printer was then exposed through DBus, so we could use that but not it’s GUI.

I’m very pleased to say that my expectation of receiving bug reports of missing features, surprised me by being just one of the few bugs it got (sadly it’s not the easiest to one to fix). The number of bugs was also quite low and it’s acceptance quite positive, which helped me managing fixing most of them then in a short time. Currently there are only 2 standing bugs, and none of them are crashes (all were fixed), one is a missing convenience feature and the other is half fixed but I failed to setup a similar environment to figure out what was happening, but this next version will include some debug info to try to figure that out.

What about new stuff?

So CUPS is not a new project that earns features everyday, actually we fear to have more features removed, that being said print-manager already covers most of it’s functionality. One CUPS feature I didn’t make use in 4.10 was the ability to reprint canceled/completed jobs, this feature also only works if the job is preserved which is something that can be disabled on the server. Of course we only enable the button if the job can do that: 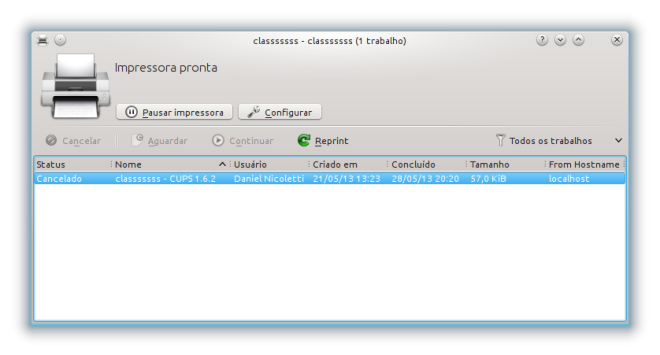 Notice the Reprint button, now there’s something even cooler than that, the last column “From Hostname” is also new, but the coolest part of it was that this was actually a feature request from a KDE 3 (kprint) bug, funny enough I fixed it on the exact same day were it completed 10 years 😀 (I accept cookies…) Next we have a bunch under the hood changed and fixes.

When I first presented the print-manager plasmoid it would have a feature to configure which jobs to show. Having “Active jobs”, “Completed jobs” and “All jobs” ended up becoming an issue, since if the completed job list had like 20 entries the plasmoid was taking several seconds to load, so since the “Active jobs” is always the smallest list I removed the other options to avoid bug reports. Latter Apper gained a plasmoid and I run into the same slowness very quickly, actually a list of 200 updates (which is not uncommon) was taking half a minute to load.

My previous investigations showed the Plasma DataEngines were too slow, in fact I believe it’s the mapping between the DataEngine and QML since plasmaengineexplorer is not _that_ slow. This was a no go for Apper, so I created a hybird C++/QML plasmoid, and quickly I noticed that this would also be the best thing for printer manager. It’s not only is blazing fast now, but also has the important benefit of not keeping four models implementations as the QWidgets dialogs already had them, so now I fix one model and both plasmoid/KCM/print-queue get it. 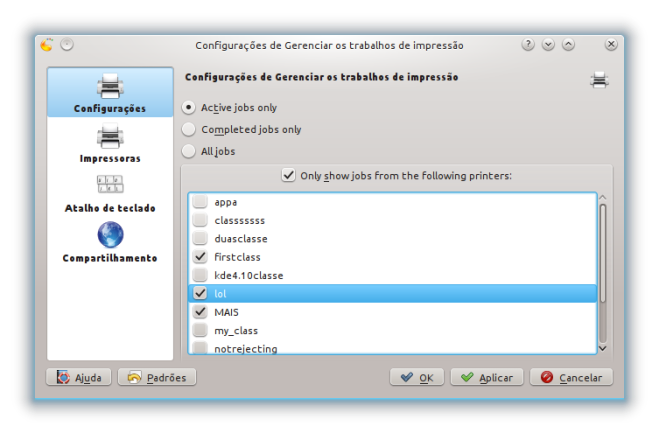 If you have used the 4.10 version you will also notice an important improvement on the above, instead of a weird LineEdit to select which printers the plasmoid will display, now you have a nice checkable list.

Bonus points to Kai Uwe Broulik that added the second icon there (and did some more stuff) which is the full System Settings printers module so you don’t need to open system settings. And yes I’d like to have a different icon for the first option but I failed to find the option (if it even exists) to do that as Plasma uses the plasmoid icon for the first item. The internal library that talks to CUPS also got several improvements and fixes which made it Qt5 safe, due to QHash getting items stored randomly (yes Qt4 says we can’t rely on the order but we know we can :P). To be honest I don’t really know how well this worked with the mess it was… The plasmoid also got several improvements:

And finally the plasmoid full of printers and a few jobs, with the new NIHSwitch, fully draggable and with I/O visual to avoid confusing, done my real world testing and so far nobody got confused:

Until KDE Frameworks 5 isn’t released (and probably also packaged), the development of print-manager will continue in the next SC 4.x releases, of course the list of TODOs is quite small and if you are willing to give a hand send me an email.